FROM dyeing it bright colours to experimenting with new cuts, Natasha Ward has always been proud of her hair.

So the 25-year-old singer was understandably horrified when large clumps began falling out, two months after she first fell ill with Covid.

She says: “I was brushing it one day when I noticed there were more strands than normal sticking to the brush. When I ran my fingers through to the ends, wisps of hair came out.

“I tried to cover up the thinning patches with a side parting. It went from bad to worse and big clumps started coming out in the shower every day.

“I didn’t want to brush my hair while I was on my own because all I did was cry.”

Natasha, from Glasgow, and mum Vena, 62, were both hospitalised in January after catching the virus.

Natasha says: “It was Boxing Day when I started feeling unwell, with a headache and high temperature.

“I’d had a negative Covid test two weeks before, so I didn’t think it could be that. I still had a good appetite and my sense of smell was normal.

“But within days I could barely walk and in the meantime, both my parents caught the virus too.

“Mum became so ill that she had to be admitted to hospital for help with her breathing.

“I ended up going to hospital, too, because I developed pneumonia and needed steroids. I was in a really bad way. It was a week before I started to feel stronger and when I thought I was over the worst, my hair started falling out.”

Trichologist Sim-one Thomas, of Hair Loss Clinic London, says our bodies focus on shielding vital organs such as the lungs, liver and heart when under attack from a virus such as Covid. That leaves other parts of the body vulnerable.

She adds: “The impact of the virus prompts a strong response from the immune system and as it fights back, the body’s resources are diverted to targeting the virus and protecting the vital organs.

“As the hair is a cosmetic feature and not vital for the body to function, when our bodies are under attack or running on empty, it is one of the first things to be impacted.”

Natasha’s hair loss thankfully appears to have slowed and she is now doing what she can to stimulate growth.

She says: “It still falls out in the shower in small clumps but the problem isn’t as bad as it was.

“Now I can feel stubble where it is starting to grow back.

“But I do look like I have a bad mullet.

“There is no quick fix and I have tried everything from rubbing castor oil on my roots to wearing a silk head scarf to bed to stop it from getting tangled.”

“Your gut is responsible for maintaining and promoting healthy blood flow, supplying essential nutrients and regulating your hormones.”

Natasha’s mum cheated death twice during her hospital stint and she is now on the mend, albeit slowly.

Natasha says: “Mum is still in hospital and learning how to walk, to talk and to eat again. It was touch and go whether she would pull through and we had to say our goodbyes on two occasions.

“But thankfully, she is now getting better.

“It has been hard seeing everything Mum has been through on top of having Covid myself, which probably explains why my hair has fallen out.

“My doctor diagnosed something called telogen effluvium, caused by the trauma.”

Simone adds: “Stress is one of the most common causes of telogen effluvium, or TE — a form of hair loss that starts two to four months after a triggering event such as grief, shock or illness. On average, we shed around 100 hairs a day. But this form of hair loss can mean we shed 300 a day, and lasts up to six months.”

One in six women ‘crippled’ by hair loss

In a study that was carried out for Simone’s hair-loss website, simonethomaswellness.com, one in six women reported that their confidence had been “crippled” by hair loss.

But Natasha is managing to look on the bright side after a very difficult few months.

She says: “Hair has always been a big thing for me and I loved experimenting with beehives and curls.

“I had a bleaching disaster in my teens and had just managed to grow my hair long, so it was devastating to lose it.

“But that isn’t the end of the world.

“I have fun wearing the wigs and have bought all kinds of different cuts and colours. It’s made getting ready in the morning a whole lot quicker too.”

OFFICE admin worker Ruth Towers began having panic attacks and sleepless nights after finding handfuls of hair on her bedsheets.

Suffering with hair loss two months after struggling with Covid, Ruth, who lives with her mum Tracey, 57, in Appleton, Warrington, says:

“I fell ill with the virus back in November and it hit me hard. I was constantly dizzy, and vomiting every day. I became so dehydrated and weak that my hands were wrinkly.

Medical assistance came out to check on me, as my mum was sick with worry. After a few weeks off work, I was on the mend and I treated myself by getting my hair cut and coloured. I felt great.

But just a month later, I began to notice hair all over the house.

Every time I showered, clumps of it would drop out and my bedsheets were carpeted in hair.

I started to freak out. I was terrified this was something serious.

I became so worried and anxious about it, I cried most days and my mum cried with me.

It was all I could think about, to the point that I began dreaming about my hair.

I had this recurring nightmare in which I would wake up, look in the mirror and be bald. I would sit up screaming in fear. It felt so real.

My dad, who owns a haulage company, offered to pay £175 for an endocrinologist appointment.

They diagnosed me with telogen effluvium – temporary hair loss often triggered by a shock to the system.

Once I knew what it was, I began feeling more positive. I knew my hair was going to return.

I was so excited to be reunited with my mates when pubs reopened last week. But as I was getting ready, I broke down.

My hairline now had spiky regrowth coming through. I was happy about it coming back but it doesn’t look great.

But my friends told me my hair looks amazing and this gave me that little boost I needed.

If by sharing my story I can provide comfort for someone else, that
makes it all better.”

‘I don’t look in the mirror anymore’

WEDDING events florist Bethan Boam lives with her electrician husband and their five-year-old daughter in Bakewell, Derbys. She launched Finishing Flourishes in 2018.

Bethan says: “As soon as lockdown was announced, the phone started ringing non-stop with brides-to-be postponing and cancelling.

I was having to give people refunds even though I had done some work for them. It was an incredibly tough time.

The stress of it all caused sleepless nights, and when I did sleep I’d wake up soaked in sweat. About four months later I started to notice my hair was falling out, and for a few weeks I was in denial.

The hairstylists I worked with had always commented on how thick and healthy my hair was.

But now I had fistfuls falling out when I washed it. My hair became thin, dull-looking and greasy, my hairline receded, and a bald patch developed on one side.

I transformed my dated kitchen for just £40 using Poundland stickers

My doctor said it was caused by the stress.

Now I always cover up with a headband or tie my hair up in a knot on my head, and I don’t tend to look in the mirror. I wash my hair twice a week, if that.

I use shampoo and conditioner, which I change every month, to see if anything helps. It still falls out but not as much as it did in that first year.
I have been meditating to try to reduce my stress levels, which I think is helping, and I hope eventually my hair will grow back.”

Get your bouncing barnet back 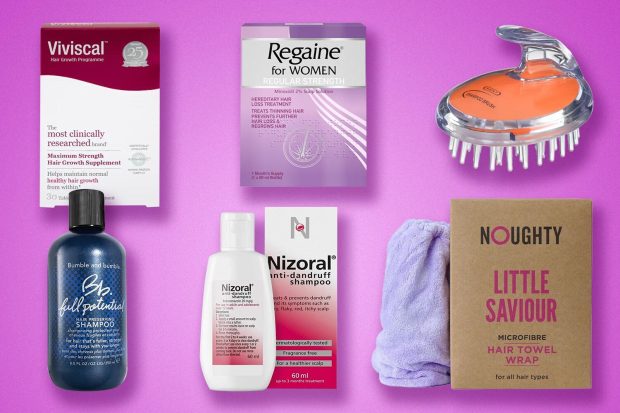 HAIR loss is distressing but many treatments promise thicker locks.

What works best for you depends on what is causing the hair to fall out.

IF your diet is poor, your hair will not be getting the nutrients it needs to grow, says Professor Vicky Jolliffe of the British Association of Dermatologists.

The body will direct nutrition to the brain, heart and muscles first. Hair supplements often contain zinc, biotin and iron but quality varies.

THESE can be loaded with caffeine to stimulate growth. But Vicky says it is difficult to measure the caffeine’s effect.

She adds: “Some thickening products can be helpful. They coat the outside of the hair to give the appearance of thicker locks.”

Vicky says: “You apply the lotion to your scalp once a day and it prolongs the active growth part of the hair cycle. If you stop, your hair returns to how it was before. It takes nine months to see results.”

IF you are diagnosed with an autoimmune condition such as alopecia areata, a steroid cream could help treat bald patches.

Vicky says: “Topical steroids can be applied to affected areas daily or sometimes an injection into the area will stimulate regrowth.”

Vicky says: “This might involve an anti-dandruff shampoo and washing hair more often than once a week. Also, minimise stress, which causes yeast overgrowth and dandruff on the scalp.”

USING a scalp massager can increase blood circulation and help with stress and tension. But there is no evidence it boosts hair growth.

Dr Shirin Lakhani, a cosmetic doctor at the Cranley Clinic in Harley Street, central London, says: “It might feel nice and relaxing but it won’t stimulate your hair to grow. That said, it won’t do any harm – and anything to reduce stress is good for your hair.”

THIS works by upping the production of collagen, which can replenish hair by regenerating follicles.

Dr Lakhani says: “It involves using a roller or stamp device covered in tiny needles to puncture the skin on the scalp multiple times. This tricks the body into a healing response. It will produce more collagen and skin cells, which helps strengthen follicles.”

WITH platelet-rich plasma (PRP) therapy, patients are injected with their own blood cells to stimulate resting hair follicles.

Dr Lakhani says: “This won’t work if you don’t have active hair follicles but can be effective. Sophisticated clinics use a larger volume of blood and produce a more concentrated PRP.”

THIS protein is naturally present in hair, skin and nails. As we age, we produce less, which means wrinkles, sagging skin and thinning hair.
Dr Lakhani says: “These can help with hair regrowth and quality. I like Skinade – and Victoria Beckham is a fan too.”

HAIRDRESSER Verity Clarke, who runs a salon in Colchester, advises using a microfibre towel to gently dry hair and says tying it too tightly can cause traction alopecia, another type of hair loss.

She adds: “Be gentle with your hair, whether you are experiencing hair loss or not. Don’t brush when wet. That is when hair is most fragile and you’ll cause breakage.”

BLUNT haircuts are better than layered cuts if your hair is thinning.
Verity says: “There is a misconception that layers make hair look thicker. They can give you more volume on top but often the ends will look even thinner. Blunt cuts can make your hair look fuller.”

Gail Porter on being bald after losing hair to alopecia