A hospital has accidentally dished out the wrong second Covid vaccine dose to a woman, in what is believed to be the first error of its kind in Britain.

The patient — who wasn’t identified — turned up at the Great Western Hospital in Swindon expecting to receive another shot of the AstraZeneca jab.

But a mix-up meant she got the Pfizer vaccine instead, her husband told the Swindon Advertiser.

The woman said she felt okay afterwards but was left furious over the error.

The hospital has launched an internal review into how the mistake happened.

Britain’s medical regulator says Covid vaccines should not be mixed, and everyone should receive the same second dose as they did for their first jab.

Scientists don’t believe it is unsafe to alternate doses but say further data is needed to confirm this before the move is given the go-ahead. Oxford scientists are currently trialling whether the doses can be alternated, in the hope of making them more potent. 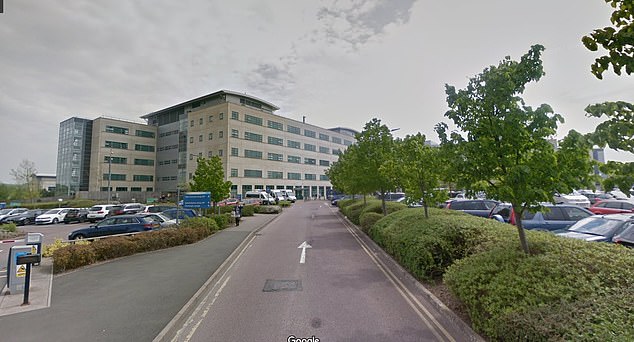 The woman received Pfizer instead of AstraZeneca at Great Western Hospital in Swindon, pictured. The hospital is carrying out an internal review into the error

‘MIXING AND MATCHING’ COVID JABS TO BE TRIALLED

Coronavirus vaccines made by Moderna and Novavax will be added to a ‘mix and match’ trial, scientists say.

Britain’s medical regulator currently requires everyone to have two doses of the same jab — either AstraZeneca, Pfizer or Moderna.

But Oxford University experts are testing whether alternating second doses could provoke a stronger immune response.

Their trial — which could revolutionise Britain’s roll-out — was already assessing the effects of combining doses of AstraZeneca and Pfizer.

Another 1,000 volunteers were recruited to the study to test combinations including vaccines made by Moderna and Novavax.

Experts say mixing jabs is unlikely to pose any safety concerns and predict it could lead to shots being even more effective at preventing an infection with the virus.

In the wake of AstraZeneca’s blood clot fears, France approved giving recipients an alternative second dose. Germany made the same move for under-60s.

But until evidence is gathered they can’t say for certain whether it works or whether it is safe.

Britain has only recommended under-30s are offered an alternative and that anyone who has already had their first dose should come forward for their second, unless they suffered the extremely rare complication.

Oxford’s mix-and-match trial was first launched in February, to investigate whether alternating doses of the Pfizer and AstraZeneca vaccines boosted efficacy.

The woman’s husband, who was also not named, blasted the hospital and said they had made it clear his wife needed the AstraZeneca jab.

‘I couldn’t believe it, it’s a huge error and very concerning,’ he told the newspaper.

‘They told us this is the first time it’s happened — not just in Swindon but in the UK.’

Explaining how the error happened, he said: ‘The call handler asked her (my wife) which vaccine she had last time so we assumed that would be written down and passed on to the medics.

‘We split up into different rooms and when we came out, she told me what happened.’

He added: ‘Afterwards a doctor came out and said sorry, but said we think you will be ok.

‘It does not make sense, there would be a number of fail safes in place to ensure this does not happen. We couldn’t understand how or why this had occurred.’

The woman said that at no point during the appointment did the healthcare staff ask to see the card she got after her first dose, although it was face up on the table in clear view.

Great Western Hospitals said despite the mix-up, the woman will not now need a third dose because the second should work to boost immunity from the first.

A spokesman for the Great Western Hospital said: ‘We have offered our sincere apologies for giving her a different Covid vaccine as her second dose.

‘We have taken advice from the South West Clinical Advice and Response Service, an external service that provides vaccination centres with expert advice and guidance.

‘It advised that both of the currently authorised vaccines in this situation are based on the spike protein and so the second dose will work as it should to boost the response to the first dose.

‘For this reason, no further doses are required, and we do not anticipate any ill effects arising from this.’

They added: ‘We are reviewing the current pathways within our vaccination hub to learn from this incident and make sure similar incidents are avoided in the future.’

The Medicines and Healthcare products Regulatory Agency (MHRA) has ruled that Britons should not receive a different second dose to their first.

They say this is because there is a lack of data on whether alternating vaccines will make them less effective at blocking infections with the virus, and stopping Covid hospitalisations and deaths.

Oxford University scientists are investigating whether doses of the AstraZeneca and Pfizer vaccines can be alternated, however, with results expected later this year.

Experts say mixing the jabs is unlikely to pose any safety concerns, and predict it could lead to shots being even more effective at preventing an infection.

Professor Matthew Snape, who is leading the trial, previously said he would be ‘surprised’ if they found the alternated jabs triggered a less potent immune response.

The trials have recently been expanded to include the Moderna jab – also being dished out in the UK – and the Johnson and Johnson and Novavax vaccines – which are yet to get the green light from regulators.

Some countries have already started alternating vaccines despite the lack of data, after regulators linked vanishingly rare blood clots to the AstraZeneca vaccine.

In France, everybody under-55 has been told they should have an alternative to the AstraZeneca jab, even if they have already received it as a first dose. And in Germany this has been extended to everyone under-60.

Britain’s medical regulator has said under-30s should be offered an alternative to AstraZeneca’s vaccine because of their comparably tiny risk of being hospitalised or dying if they catch the virus.

But people in this age group who have already had AstraZeneca should still receive it as a second dose because there is no evidence of blood clots occurring after this shot.