Heading back to the office? Consider taking a blanket! Colder temperatures in the workplace can lead to WEIGHT GAIN by slowing your metabolism, scientists warn

By Ryan Morrison For Mailonline

Colder temperatures in an office can increase weight gain by slowing down your metabolism, warn scientists, who say you should ‘consider taking a blanket’.

This in turn decreases the metabolic rate – which is how fast we burn calories – and can lead to increased weight gain, especially when added to a sedentary lifestyle.

People are starting to return to offices in cities around the world after months of lockdown due to the coronavirus pandemic led to a rise in home working and McLeod says increasing office temperature can improve employee health.

He said most offices are kept at about 70 degrees Fahrenheit (20C) which is an unhealthy temperature and ‘too cold’, suggesting it should be 72F to 81F. 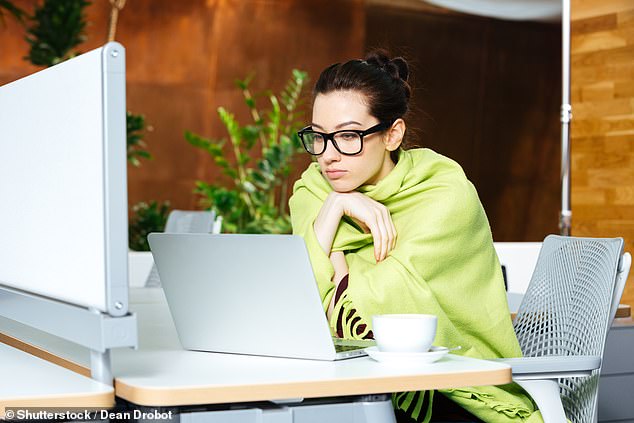 Colder temperatures in an office can increase weight gain by slowing down your metabolism, warn scientists, who say you should ‘consider taking a blanket’

The basic amount of calories an average adult needs per day is 2,000kcal for women or 2,500kcal for men.

This is based on the amount of energy the body needs to carry out basic functions and to walk and work throughout the day.

People who exercise a lot need to eat more calories to fuel their efforts, and young people and children burn more energy, too.

If you eat more calories than you burn in a day, you will get fatter.

Eating fewer calories than you burn will make you lose weight.

Foods which are processed and have high levels of carbohydrate, sugar and salt have higher calorie numbers than fresh fruit and vegetables.

Changing your physical environment can substantially alter the way your body works and impact on health and fitness, according to the expert, who added that ‘if you aren’t losing weight, check the thermostat where you work or live’.

Humans maintain a relatively constant core body temperature in the range of 97F to 101F even when we’re in a colder environment.

This process is very sensitive to temperature and, according to his research, one degree drop in body temperature decreases our metabolic rate by over 7%.

The resting metabolic rate for someone with a 101F body temperature is 30% higher than if their temperature was 97F, at the low end of the healthy range.

This is where his idea of a warmer office for healthier employees comes in.

He said: ‘Increasing body temperature by four degrees can burn more calories during the course of the day than the average person burns as a result of all their daily physical activity.’ 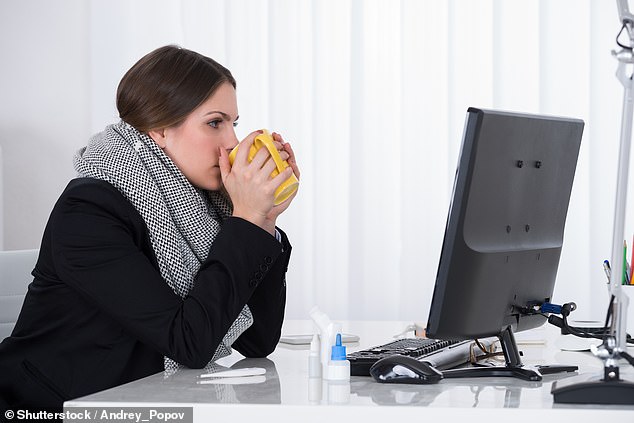 McLeod said the average 70F of most office environments is too cold for most women and many men, especially if they sit at a desk all day. He proposes a correct room temperature of between 72F and 81F.

He said if you don’t have control over the thermostat, consider a blanket, jumper or even wearable devices that warm your personal space.

Heading back to the office? Sitting at a desk by a WINDOW makes you more productive than by a wall, study claims

Sitting at a desk near a window may make you more focussed and productive at work than if you’re stuck by a wall, a study has claimed.

After surveying workers in a London-based open-plan office, researchers concluded that having more ‘visual control’ at work makes employees happier and more efficient.

Staff reported being happier when they faced the room, but didn’t have too many other desks — which can provide distractions — in their line of sight.

The findings, the team said, could help employees ‘build back better’ as offices reopen following closures amid the global COVID-19 public health crisis.

The study was conducted by social and spatial networks researcher Kerstin Sailer and colleagues at University College London.