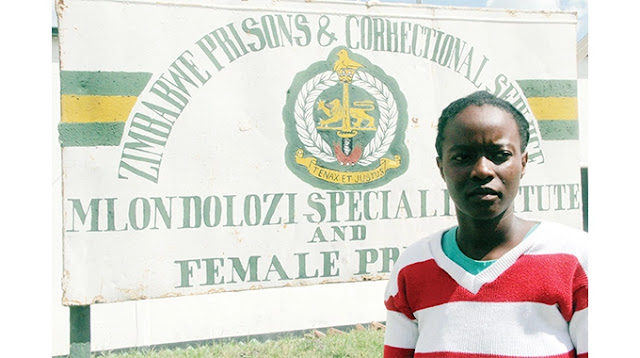 HER face is cheerless as she struggles to hold back tears
in her glinting bloodshot eyes.

Ms Lousinonh Siziba is among 244 mental health patients
detained at Mlondolozi Mental Health Prison for almost a decade awaiting
competence evaluation by a mental tribunal board.

Over 400 inmates with mental illness have for the past 10
years been stuck at the Zimbabwe Prisons and Correctional Service (ZPCS)
centres across the country following delays by the mental health board to
review their condition for possible release.

Ms Siziba’s narrative is consistently engaging and filled
with sorrow as it evokes memories from the past.

With a rare mixture of honesty and compassion, Ms Siziba
shares her own experiences with postpartum psychosis.

She reveals her painful experience, lack of emotional
support from her boyfriend and complications  f new motherhood, which led to her killing her
seven-month-old baby.

Her encounter with PND, which she explores fearlessly, is
harrowing. Ms Siziba’s story clearly illuminates the pain and shame she
suffered upon giving birth.

“I got pregnant and gave birth in November soon after
finishing writing my O-level examinations at Tennyson Hlabangana High School. I
suffered from puerperal psychosis and got bitter because of what was happening
in my life, including the complications with my boyfriend,” she said.

“He didn’t give me adequate emotional and material support
during pregnancy and after giving birth and it really affected me
psychologically, particularly knowing that I would not be proceeding to
A-level.”

Ms Siziba said after seven months of giving birth, she
killed her baby daughter. She was arrested and later taken to court on murder
charges.

“On November 4, 2014, I was brought to the High Court,
which was on circuit in Hwange and the judge found me not guilty and acquitted
me. He retained a special verdict by reason of insanity and I was committed to
Mlondolozi Mental Health Prison for treatment and rehabilitation.” she said.

Ms Siziba said it took her 12 months to fully recover from
PND.

“It took me about a year to be stable because nurses and
psychologists gave us counselling and occupational therapy. Rehabilitation
officers also gave us tasks such as hairdressing, making mats and that really
helped us a lot and I am perfectly fine now and ready for release,” she said.

“My family also played a significant role as they stood by
me. I don’t think, I would have completely recovered without their support.

“My major concern is that despite my recovery, I have been
stuck at Mlondolozi for about nine years now waiting for the board to sit and
determine my case. Human rights lawyers, the Minister of Justice, Legal and
Parliamentary Affairs (Minister Ziyambi Ziyambi) and prison bosses visited us
on several occasions and we told them about our plight, but nothing has
happened to address our issue,” said Ms Siziba.

“At one time I thought of writing a petition to the
President, but being someone perceived as mentally ill, I had second thoughts
knowing that I wouldn’t be taken seriously. As mental patients, we feel we are
treated like criminals and being discriminated yet this is not out of choice.”

Growing up in Jambezi, Matabeleland North, Ms Siziba said
she had never suffered from mental health issues until she fell pregnant and
gave birth.

“We are in this mental health institution and living with
people convicted for various crimes, yet we are classified as mental patients.
This is a painful experience considering that whenever there is amnesty, we are
left out while others serving for similar offences, are released,” she said. Ms
Siziba said her prolonged stay at Mlondlolozi while waiting for a tribunal to
sit is likely to cause a relapse.

“Since I came here, I noticed that the board hasn’t sat.
The Minister of Justice came here and we told him about our plight and he
assured us that he would look into the issue, but nothing has been done to
date. People always stigmatise mental patients,” said Ms Siziba.

She hopes that in the event that she gets released, she
will either go back to school or utilise the skills she acquired at Mlondolozi
to sustain herself.

ZPCS Commissioner-General Moses Chihobvu said the inmates’
fate lies in the hands of the mental tribunal board, as they are not eligible
for amnesty in the absence of intensive assessment. He said the swelling number
of the inmates is now straining the facilities and creating congestion.

Section 68 of the Mental Health Act provides for the
establishment of mental health hospital boards.

The board of the institution is the first port of call
where one’s case is reviewed for possible release. If satisfied that the
patient can be released, it makes the necessary recommendations to the
tribunal.

When the tribunal sits, it considers a patient’s case and
then makes a final decision on whether to release the patient or order further
detention.

“Giving birth to a baby brings about many changes, and
these can include changes in a new mom’s mood and emotions. Some women
experience more than the normal ups and downs of the postpartum time period,”
he said.

“Many factors play a role in postpartum mental health.
During this time, the most severe end of the change spectrum is a condition
known as postpartum psychosis, or puerperal psychosis.”

Dr Ranga said the condition causes a woman to experience
symptoms that can be scary for her.

“She may hear voices, see things that aren’t reality, and
experience extreme feelings of sadness and anxiety, violent thoughts, such as
telling a mother to hurt her baby. These symptoms warrant emergency medical
treatment,” he said.

Dr Ranga said symptoms vary, and can change rapidly. They
can include high mood (mania), depression, confusion, hallucinations and
delusions. “When you are thrown into the deep end you should have defence
mechanisms to help you cope with situations likely to cause depression,” he
said. “As a community we need to know how to defend ourselves mentally in the
event of a traumatic situations without resorting to anything that is
self-destructive.”

In terms of treatment, Dr Ranga said PND has two modalities
where medication tablets and psychologist help are required.

“In the case of Siziba even when she gets better from PND,
in the long run she will need a psychologist. Even when you get normal, but
when you are later told that you killed your own son or daughter, you will be
affected somehow psychologically,” he said.

Ms Jacqueline Nkomo, a local psychologist, said after
delivery there are many things that take place, which affect a woman in terms
of mental health.

“PND is caused by fluctuating hormone levels from the time
you give birth up to day 10, but if you see it going beyond that period, it
becomes an issue of concern. “What happens with PND is that each time you look
at the child, you feel this anger or the person is always crying and they no
longer take care of themselves,” she said.

According to the World Health Organisation it is estimated
that one to two out of every 1 000 women experience postpartum psychosis after
giving birth. The condition is rare and usually occurs within two to three days
of delivery. Chronicle