Uber–the-top! ‘Lazy’ customer films delivery driver packing her food order into his scooter and checking satnav… before realising she only lives across the street

By Darren Boyle for MailOnline

This is the hilarious moment a Parisian woman films a takeaway delivery rider picking up her food from a restaurant across the street from her apartment.

The woman, identified only as Laurène P, said described herself as ‘lazy’ but explained that she could not pick the food up herself as she was under curfew due to Covid-19.

She filmed the driver leave the restaurant carrying her food in a brown bag to his scooter – which was almost directly underneath her window. 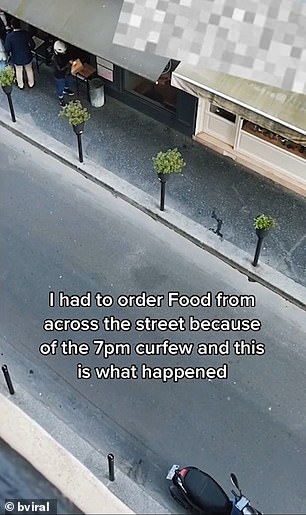 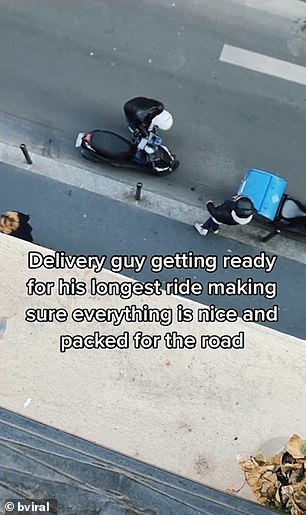 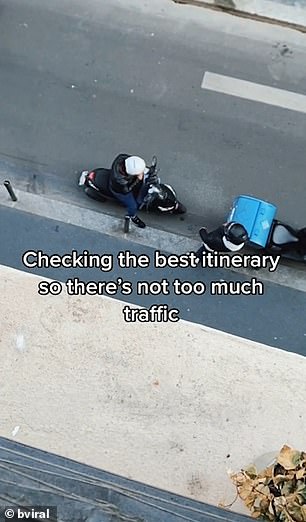 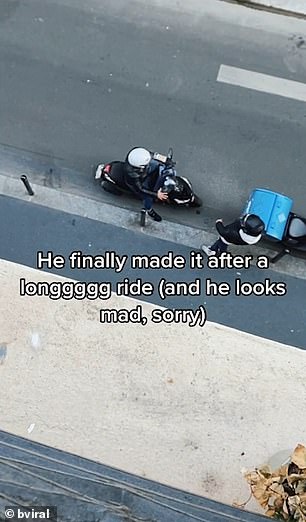 The courier placed food inside a special thermal bag before he checked his phone for directions to the delivery.

After a few moments double checking the directions, the rider realises that he is directly outside his destination.

Laurène P, who is a digital acquisition product manager for a large company and yoga teacher, said she could not leave her home after 7pm because of Covid-19 restrictions.

In a commentary to go with her video, she wrote: ‘I had to order food from across the street because of the 7pm curfew and this is what happened.

‘Delivery guy getting ready for his longest ride making sure everything is nice and packed for the road.

‘Checking the best itinerary so there’s not too much traffic.

‘He finally made it after a longggg ride (and he looks mad, sorry)

‘My lazy ass is about to get foooood.’

More than 1.5 million people have viewed the video on TikTok.

One viewer asked why the delivery rider was allowed to ignore the curfew.

She responded: ‘They have a government paper. I don’t because my company has a full work from home policy.’

Others wondered why she had not ordered her food earlier.

Laurène replied: ‘I had planned to cook a hellofresh meal but got lazy and in the mood for cheese and charcuterie on baguette. I’m a french cliche.’ 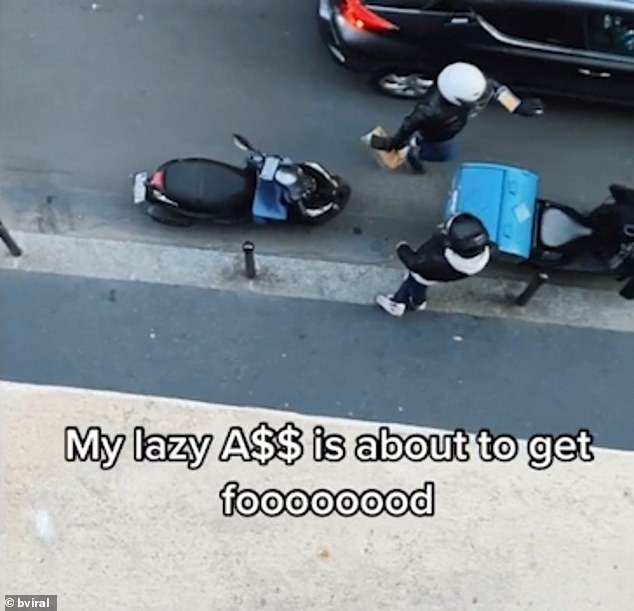 French President Emmanuel Macron has announced an easing of the nation’s Covid-19 restrictions, with the reopening of outdoor terraces of cafes and restaurants on May 19, when the nightly curfew will be pushed back to 9pm.

The government’s plan provides for permitting foreign tourists back into France on June 9 as long as they hold a ‘sanitary pass’ with proof of a Covid-19 vaccine or a negative PCR test.

On that same day, cafes and restaurants will be allowed to resume regular service until an 11pm curfew. Events of up to 5,000 people will be allowed.

The final stage of the plan will see the end of the night-time curfew and the lifting of most restrictions on June 30, although nightclubs will remain closed.

France is reporting about 29,000 new confirmed cases each day, down from about 40,000 earlier this month.

More than 5,800 Covid-19 patients are in the country’s hospital intensive care units, a slight decrease from previous days.

France has reported almost 104,000 virus-related deaths in the pandemic.